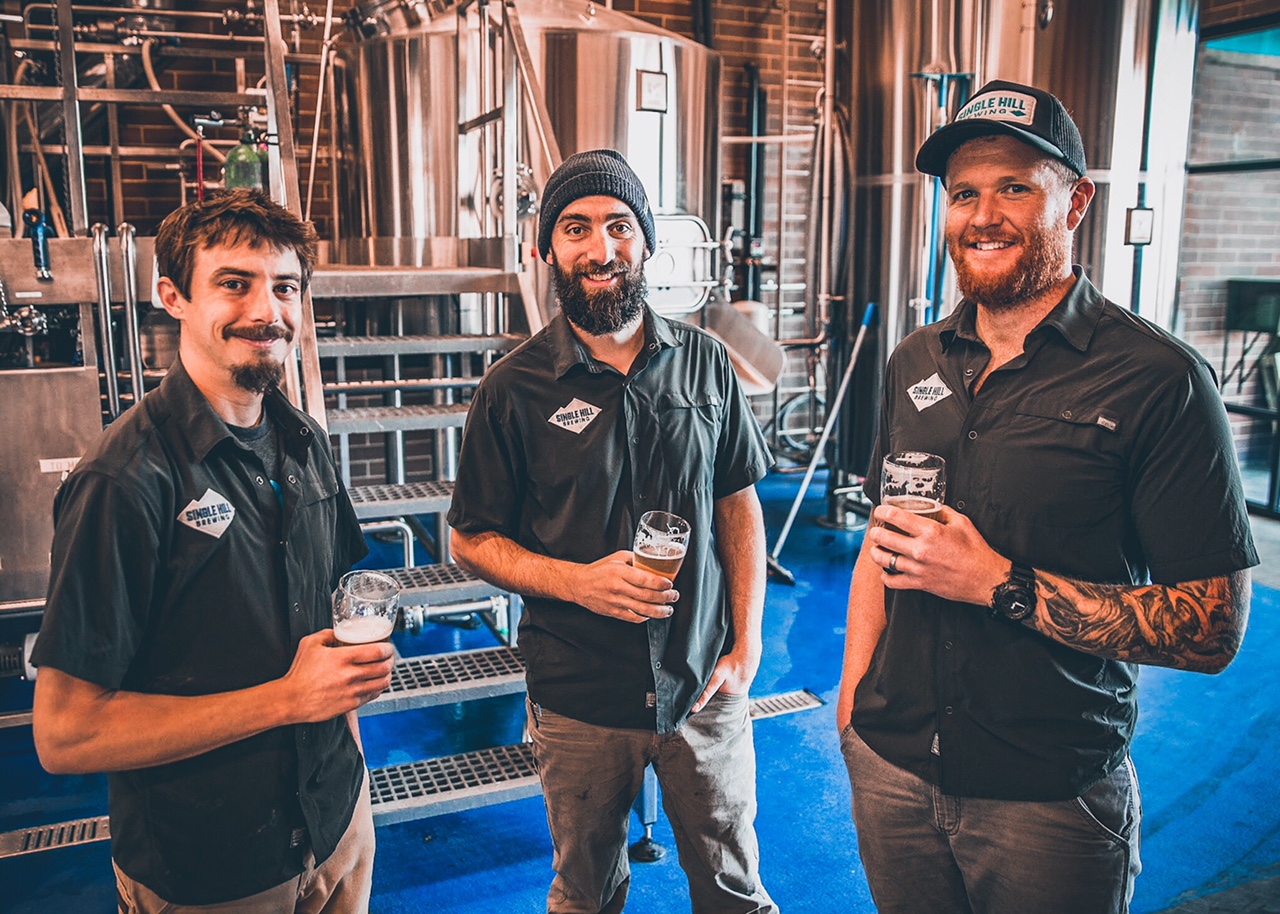 In the months since the Yakima Valleyâs newest brewery and taproom opened in downtown Yakima, the founders behind Single Hill Brewing have captured the spirit of the Valleyâs craft beverage culture â passion, pride, innovation and excitement about our community here in the heart of hop country.

Itâs a good thing for Yakima that the founding duo, Zach Turner (Co-Founder & Director of Liquids) and Ty Paxton (Co-Founder & Positive Vibes Director) teamed up! âIâm really thankful Zach and I collided,â says Ty. Itâs far more than just their professional expertise that makes them a perfect partnership. While Ty brings a wealth of marketing and sales experience and Zach comes from 15 years of brewing experience, itâs the passion for the craft and long-held dreams that makes them a perfect fit. âHe (Zach) had been scheming plans for his own brewery for many years.  So when it came time to execute, he had already thought of most of the barriers and challenges a new brewery faces,â says Ty. As for himself, he says, âIâve always been an advocate for the craft beer scene.  I would get obsessed over beer brands and new flavors that would come to market.  Although I didnât have a specific business plan in mind, when I would visit breweries I found myself taking mental notes, seeing how things could be done better.  Even well into my career in marketing, I maintained a peripheral dream of one day opening a brewery.â

Together, they envisioned Single Hill as a hub of community that would allow them to help make Yakima an even better place to live and visit. There was no question in their minds they wanted to be in Yakimaâs downtown core. According to Ty, they chose the historic, tree-lined boulevard of Naches Avenue âfor the opportunity to revitalize and expand on areas of our beautiful, historic city.â  As Ty relates, after âdoing a bit of research, courtesy of our Yakima Valley Museum, we were able to uncover post cards and other historic relics showcasing Naches Avenue and its thriving beauty in the early years.  So, it was a clear decision to choose this location â not only to celebrate our historic neighborhood, but also to expand the reaches of the downtown core.â

They opened their doors in June 2018 as a culmination of years of planning and a few intense months building their dream. Now, their dream is a cornerstone of Yakimaâs downtown scene. Like they say on their own website, âbeer grows community.â They take pride in the energetic and welcoming vibe of their taproom. Single Hill brings together brewers, farmers, the Yakima community and visitors in the heart of Yakima Valley hop country â where world-class beer gathers people from every corner to work, play, create and grow. Youâll always find a sense of camaraderie and a wide range of eclectic beers for just about every palate.

You can taste their commitment to crafting outstanding beers in every one of their brews. Being in the heart of hop country, in close proximity to the hop farms, fuels their creativity. They have a unique approach to brewing that celebrates the innovation of local hop growers and the region with an emphasis on hop variety, flavor and aroma. With 16 taps in their taproom, youâll find everything from refreshing, light beers, a range of classic styles and hoppy IPAs to tart and fruity sours and experimental brews.

So, stop by, hang out and find your next perfect beer! Always family friendly, they have a great activity corner for kids and local food trucks on rotation, serving up the flavors of the Valley.

Learn more about Single Hill Brewing at their website: https://singlehillbrewing.com/

Categorized in: Featured, Hand-crafted Stories of the Yakima Valley, Hops and Beer