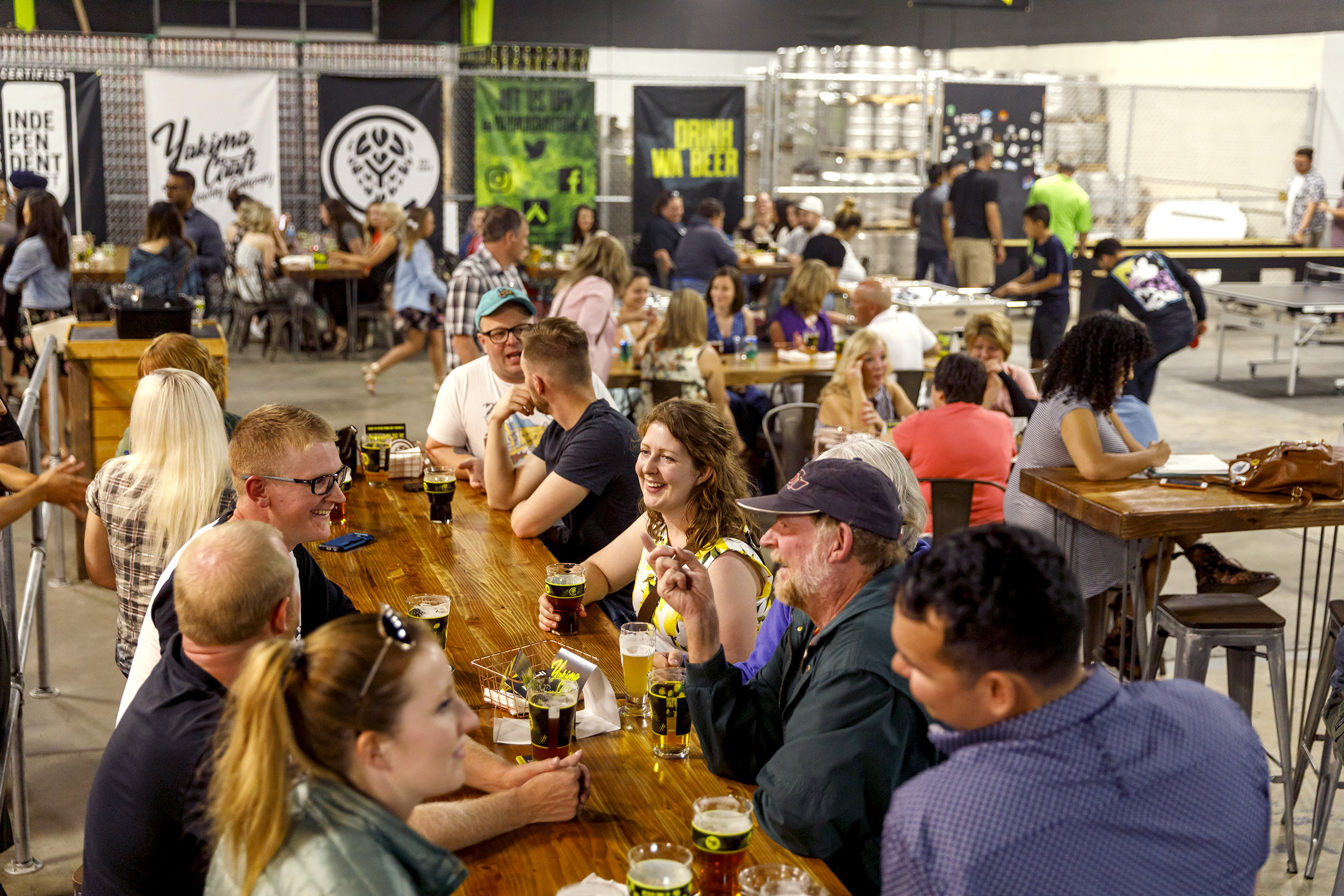 Did you know American Craft Beer Week is May 13 to 19? Thereâs still time to come to the source and raise a glass in hop country! Of course, any time is a good time for a beercation! The Yakima Valley grows 75% of the nationâs hops and is home to more than a dozen craft breweries. So, take the short drive to the Yakima Valley for a beercation this weekend or any weekend!

Two Yakima Valley breweries nestled in pastoral settings are the perfect end to a scenic drive. If you take the beautiful trip over White Pass (or Chinook Pass after Memorial Day Weekend), stop at BronYrAur Brewing in Naches, about 10 miles before the city of Yakima. There you can sample their lineup of craft beer and enjoy brick oven pizza on beer-infused dough, sliders, salads, sandwiches and porter brownies. Then drive over the hill to Cowiche Creek Brewing. Located in a picturesque valley in Cowiche, this 2000-square-foot brewery building and 20-barrel brew house were built by the brewer and his family. Cowiche Creek is known for the family-friendly atmosphere, special dining events, live music, great views and, of course, the craft beer.

In downtown Yakima, youâll find several breweries within walking distance of each other. Downtown Yakima was actually home to the first brewpub in the nation. Bert Grant began the national brewpub movement in Yakima by opening the first brewpub in the U.S. post-prohibition. Grants Brewery (aka Yakima Brewing & Malting Company) opened in 1982 in the Front Street Historic District of Downtown Yakima in the Northern Pacific Railroad Depot. So, this Craft Beer Week, raise a glass to Bert who would have been 91 on May 17, 2019, and thank him for starting  the first U.S. brewpub, for brewing the first IPA, Scottish Ale and Russian-style imperial stout in the U.S., building the first hop pelletizing machine, patenting the âisomerizedâ hop pellet strictly for aroma, introducing the Cascade hop, now one of the most prominent and widely used hops in craft brews, and helping to develop the âfresh hopâ ale in 1997.

Single Hill Brewing Â sits on the historic, tree-lined boulevard of Naches Avenue, two blocks north of Yakima Avenue. They serve their beers in a contemporary taproom with large, hop-lined patio made for gathering and enjoying bites from local food trucks on-site. With 16 taps in their taproom, youâll find everything from refreshing, light beers, a range of classic styles and hoppy IPAs to tart and fruity sours and experimental brews.

Valley Brewing Company was founded by three best friends with a passion for the craft and a love for beer. You can feel their dedication and passion in the taproom they renovated together and in their beer. Hang out on their patio and lawn and enjoy specialties from local food trucks. Tucked away, but worth the find, Wandering Hop Brewery serves up innovation in their taproom. The beer they brew is inspired by their travels and experiences theyâve shared with family and friends. They keep a variety of beer on tap from heavily hopped IPAs to imperial stouts, ambers, pales and seasonal favorites.Â

Continue your trip to Sunnyside and visit the folks at Varietal Beer Co., proudly producing âdifferentâ beer. Sample a wide range of brews for every palate. They like to innovate and have produced a little bit everything including hazy pale ales, double IPAs, lagers, dark lagers, complex sours and more. They also serve ciders and pour guest taps. With their lovely beer garden and visiting food trucks, theyâre a family and dog-friendly space for the community and the Valley. Also in Sunnyside, enjoy modern craft beer and rustic American cuisine at Snipes Mountain Brewery & Restaurant.

On the way back through the Valley, take the American Hop Museum tour in the city of Toppenish. Learn about the growth of hop farming in the Yakima Valley and view harvest equipment displays and exhibits. In Toppenish, there are also large murals painted by local artists depicting the hop harvests of yesteryear before harvests were mechanized.

Before you head home, visit the fourth largest brewery in the state of Washington, located on a family-owned commercial hop farm. Bale Breaker Brewing Company is the only brewery where you raise your glass just steps from where the hops are harvested. Bale Breaker is run by a multi-generation hop-growing family that moved into crafting beer and has had phenomenal success and growth since they first opened their doors in 2013. Visit the 30-barrel brew house at their 27,000-square-foot facility and the onsite taproom that hosts frequent food trucks and events. Take your time and kick back to enjoy the beautiful outdoor patio and lawn and take in the aroma of the hops. Tours of the facility are available every third Saturday of each month from April through September. During tours, the crew will open the brewery doors from 1 to 2 pm for an exclusive look into the production side of things. The tours will be free, open to the public and available to all ages welcome. May 18 is the next tour date.

If you can only make it to the Yakima Valley for one weekend, choose Saturday, October 5, for Fresh Hop Ale Festival! Known as one of The 10 Best Beer Festivals in the Nation, this is where you can sample fresh-hopped beers made with hops that have been picked within 24 hours of brewing. There will be food vendors, live music, a fresh hopped beer competition and more breweries than you could ever visit in one evening all vying for your attention. Attend this beer party that supports a good cause. Festival proceeds are given as grants to more than 20 Yakima County-based arts and science non-profit organizations.