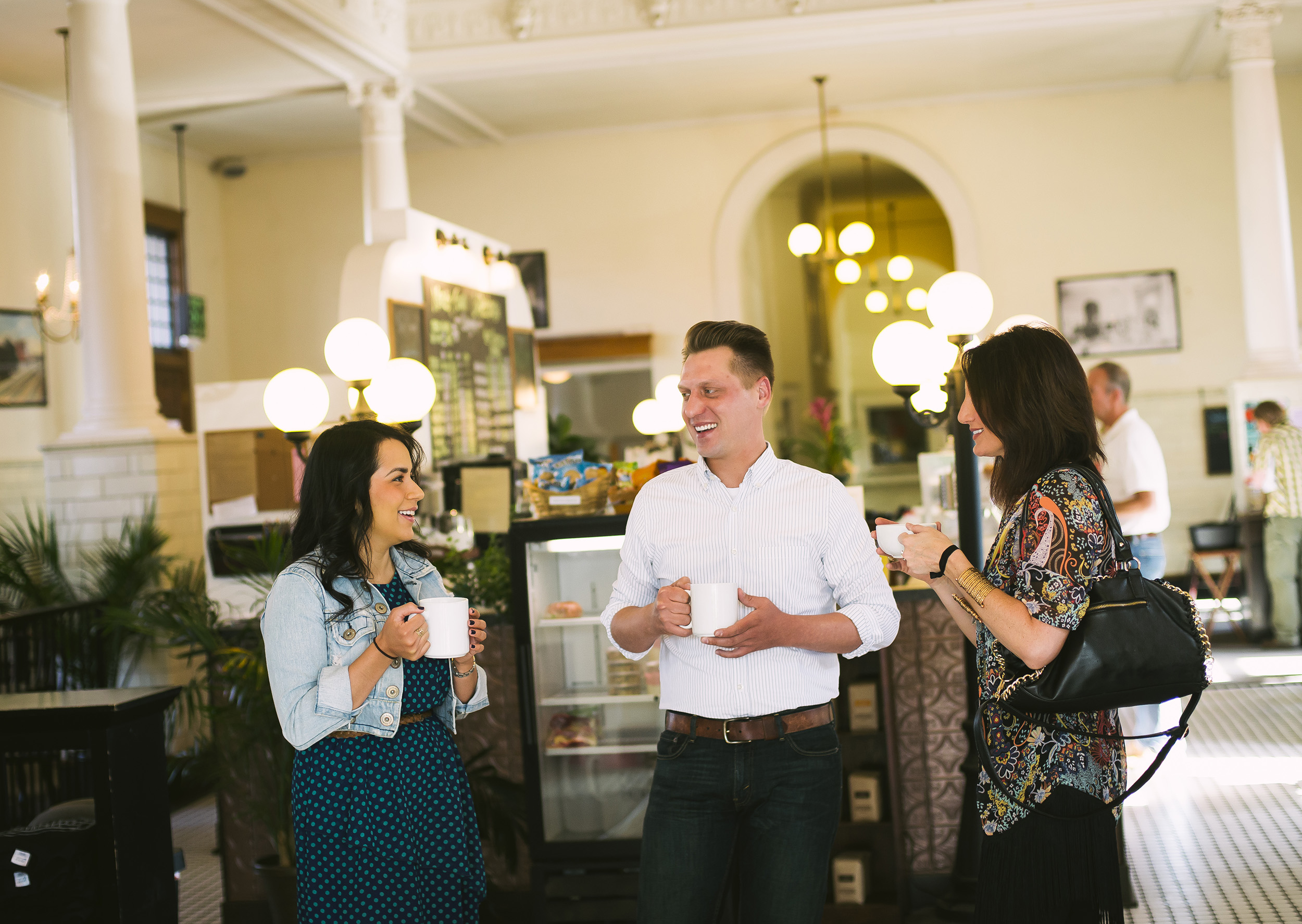 Dine in iconic history in some of Yakimaâs architectural gems. Many of Yakimaâs great restaurants, sports bars and coffee shops showcase the historic character of the city, established in 1885 and incorporated in 1886.

Iconic, historic buildings stand throughout the city of Yakima. Each is architecturally unique and many are carefully restored to house some of our favorite establishments, enhanced by modern amenities and graced by art installations. In addition, downtown city streets feature period cast-iron lampposts and historic North Front Street is home to several historic buildings and streets paved with bricks, reminiscent of the 1908 streetscape.

Celebrate the history of the Yakima Valley and visit one of our favorite restaurants in historic Yakima structures. Many of them will participate in Yakima Valley Restaurant Week, March 22 to 30, a perfect time to take advantage of the ambiance and cuisine!

Carousel Restaurant & Bistro is located in one of downtown Yakimaâs oldest buildings. This was the Valleyâs first Opera House, built in 1890 by contractor A.F. Switzer, who also built other structures in The Old North Yakima Historic District along North Front Street. The Carousel specializes in gourmet French cuisine.

Normâs of Yakima is a restaurant and sports bar known to locals as a âcomfort pubâ for the home-style fare, including seafood mac & cheese, burgers, fish and chips and more. It occupies part of the main floor of the Lund Building in the historic district of Downtown Yakima. This building is one of the oldest surviving structures, from when Yakima was called “North” Yakima before incorporation. Commissioned by Thomas Lund in 1898, architect Charles Bruenn and contractor A.F Switzer completed the “Alfalfa” saloon in 1899 for $4,000. This saloon operated until 1910 when it became The Chicago Clothing Company, which operated until 1968. This building features the original, locally quarried stone faÃ§ade, hardwood floors and 14-foot, high-pressed tin ceilings. The faÃ§ade has been modernized over the years, recently with a huge glass garage-style door which opens the inside to Yakima Avenue.

Crafted Yakima, a Downtown Yakima gastropub is located on 1st Street in a 1906 building as a saloon. The character of the building has been preserved, keeping the original hardwood floors, tin ceiling, exposed brick walls and original leaded glass windows. The exterior is now graced by a large, artistic, modern mural painted on the south faÃ§ade. The restaurant offers farm-to-table, chef-driven fine dining that honors the Yakima Valleyâs abundant harvests.

Yakima Sports Center  occupies what was the Schaefer Theater, founded in 1909 by Mr. Fred Schaefer. The theater was on street level with the Valley Inn on the second floor. In 1917, the hotel in the building became the Columbia Hotel and operated for the next few decades. The ground floor became a card room and diner. The iconic vintage neon sign was installed in 1968. This spinning sportsmanâ hunter known to locals as âGusâ revolves and shoots neon blasts skyward. This restaurant and bar in Downtown Yakima claims to serve the âbest Nachos in townâ and they could be right. Youâll also find great happy hour specials and a varied menu, from steak to chicken and waffles and a selection of burgers. This is a live music venue and sports bar.

North Town Coffeehouse is located in the historic Northern Pacific Train Depot built in 1910, the third depot built at that location. The first dated to 1885 and was a simple boxcar. The second was a wooden structure with a clock tower, where a portion was moved to become part of a duplex when this existing stone structure was built. Today, it houses the North Town Coffeehouse in its expansive interior space. Intact marble floors, high cove ceilings, and ticket office are visible in this historic RR waiting room in the Historic District of Downtown Yakima. This local gathering place offers Stump Town Coffee, pastries and free Wi-Fi. In front, enjoy a sculpture erected in 2010 by Will Robinson. Called Convolution, itâs a smooth and rough circular surface âevoking visual remembrances of railroad stem engines.â

Just outside of Yakima

There are many small communities in the Yakima Valley, founded in the late 1800s and early 1900s as a result of the railroads arrival and the building of irrigation canals. We find other historic buildings throughout the valley.

The Chophouse at the Old Warehouse is a community landmark in nearby Zillah, WA, with original warehouse wood floors and beams on the main floor restaurant. A live music and event venue is on the lower level, with furniture auctions held regularly in the building. Relax on the huge outside deck to enjoy locally sourced food. Walter Granger, superintendent of the Sunnyside Canal project, which delivered water from the Yakima River to the arid southern Yakima Valley, chose the town site in 1892. The town was named for Miss Zillah Oakes, daughter of Thomas Fletcher Oakes, president of the Northern Pacific Railway, who backed the building of the canal.

HopTown Wood Fired Pizza serves a modern take on pizza in an old country store with original wooden floors, numerous windows and front porch that invites diners on warm days. Thereâs an expanded, pet friendly outdoor area that includes a patio, bocce ball courts and a place for bands to play. Enjoy the selection of wood-fired pizzas with just the right sprinkling of hops. Across the street, in the nearby field, visitors can view a wooden hop kiln dating back to the 1890s. Donald, WA, a census-designated place in Yakima County, was founded in 1910.  It was named after George Donald, an early railroad pioneer and the president of the North Yakima and Valley Railway Company. The town site, primarily a rural railroad junction, was acquired from George Donald by the railroad.

To learn more about the History of Yakima take a Free Guided Yakima History Walking Tour, no reservations required. All tours begin and end at the Historic Train Depot on North Front Street and last about 1Â½ hours. 2019 Tours start at 10 am and are offered on Saturday, May 18, June 8, July13, September 14 and October 12.Enjoy a special Horrifying History Tour at 1 pm on October 26, featuring true life historical horrifying Yakima events which may not be suitable for children. For tour information, contact EllenAllmendinger@yahoo.com

Watch for the second in our âSurround Yourself with Historyâ series: Where to stay! Weâll help you explore Yakimaâs boutique hotels and historic homes.

Categorized in: Food and Dining