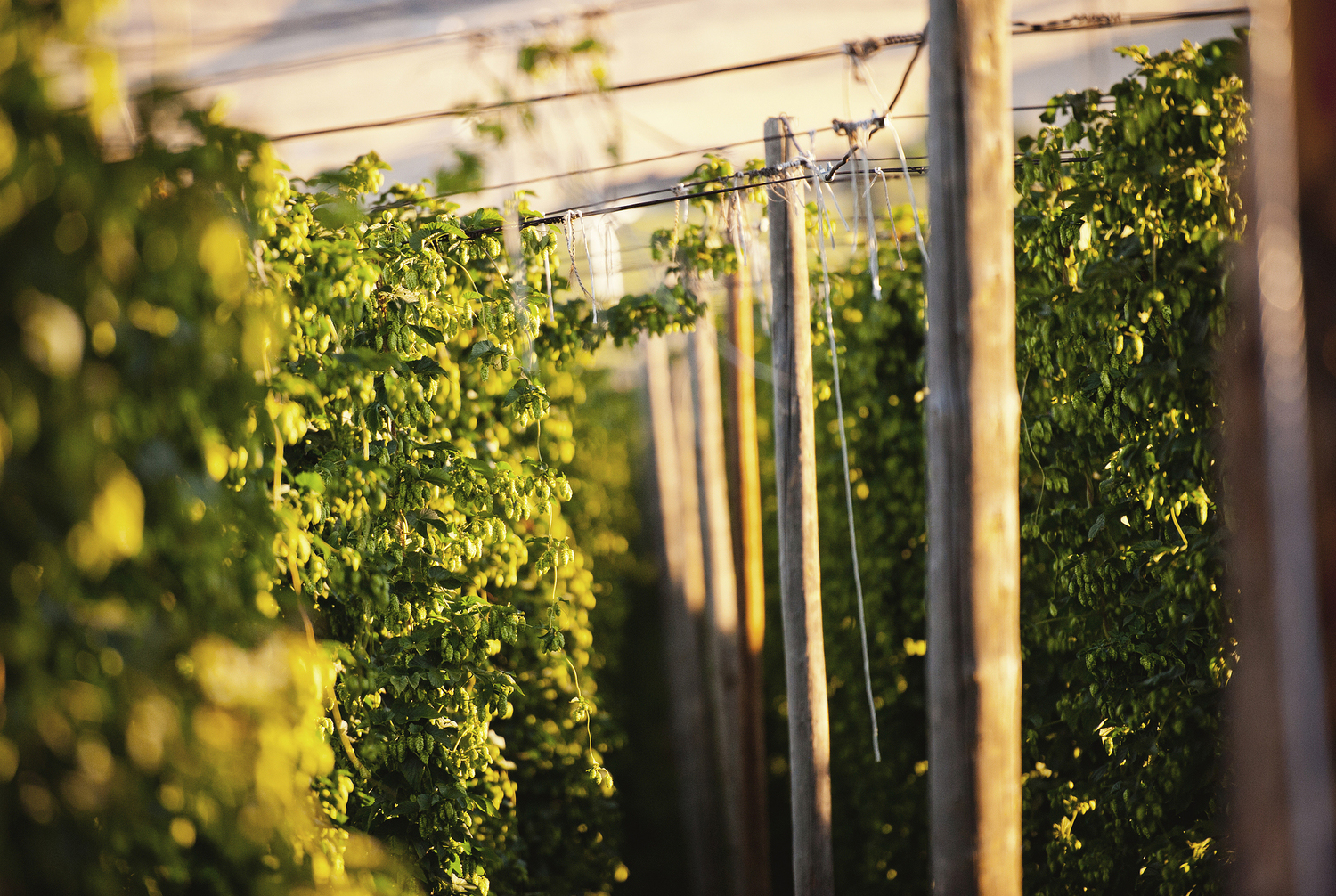 The Yakima Valley is U.S. hop country. Our hop growers keep the craft beer industry brewing! The Valley is one of the most important hop growing regions in the world, harvesting 75% of the nationâs hops. Between the hop industry and the hopping craft brewery culture, Yakima is a true beer loverâs destination. After all, this is where you find the only true hop country craft beer trail.

So, as you get ready to raise a pint of your favorite craft brew, hereâs a little background about how hops are grown, harvested and processed and how theyâre used in brewing.

SO WHAT ARE HOPS?

Humulus Lupulus (hops) are the flowering cones of a perennial climbing vine (called bines) that is primarily used in the beer brewing process. Hops have been used in brewing since the early days to ward off spoilage from wild bacteria, and to bring balance to the sweetness of malts. Hops also help with head retention (the foam on your beer), act as a natural filtering agent, and impart unique flavors and aromas.

WHY ARE SO MANY HOPS GROWN IN THE YAKIMA VALLEY?

The Yakima Valley has proven to have the ideal combination of the right climate, day length, soil and access to irrigation systems for hop growing, which is why over 75% of our nationâs hops are grown here.

WHAT PART OF THE HOP IS DESIRABLE TO BREWERS?

The female hop cone, which forms on the bine in late summer, contains various oils and acids that are essential for the flavor and aroma in beer, especially the hop-forward beers such as IPAâs. Peel open a fully-formed hop cone and you can check out the sticky yellow lupulin glands inside, the active ingredient in hops that give each variety its own flavor and characteristic.

WHEN ARE HOPS HARVESTED?

Around the Yakima Valley, the annual hop harvest generally starts towards the end of August and lasts throughout most of September. Most picking facilities run 24 hours-a-day, 7 days-a-week, for close to 30 days.

DO HOPS HAVE TO BE REPLANTED EACH SEASON?

No, hops are a perennial climbing vine that remains dormant underground throughout the fall and winter. The plant begins to grow from the ground each spring as the weather warms.

ARE HOP CONES HANDPICKED FROM EACH HOP BINE?

Not anymore. The hop bines are first cut close to the ground by a tractor called a bottom cutter. Then a hop truck is pushed though the row by a tractor called a top cutter, which cuts the top of the bine from the trellis. The harvested bine is transported back to the picking machine in the back of the hop truck.

SO NOW THE BINE IS IN THE BACK OF A TRUCK. THEN WHAT?

Each bine is hand-loaded (upside-down) into the picking machine. Many of the local picking machines have been around since the 1950âs, and are still going strong!

WHAT HAPPENS IN THE PICKING MACHINE?

Yes. At harvest time, hops contain roughly 75% moisture. If stored with that amount of moisture throughout the year, they would spoil. Hops are dried in a hop kiln to an ideal moisture content of about 9-10%, allowing them to be stored and used in brewing throughout the year.

HOW ARE HOPS PACKAGED WHEN THEY LEAVE THE FARM?

After the hops are dry and cool, they are compressed into 200 pound, burlap-wrapped bales. Truckloads of bales are delivered to warehouses at hop processing companies around the Yakima Valley, where they will be packed into smaller bales of raw hops, or processed into pellet and extract form. These hop processing companies act as the middle-man between the farmer and brewer. Once the hops have been processed and repackaged, they are shipped to breweries all around the world, ready to be made into delicious beers of all kinds!

SO WHAT DOES THE BREWER DO ONCE THEY GET THE HOPS?

It depends on the type of beer they are making, but generally, hops are boiled with a malt sugar solution (called wort), and then yeast is added to begin fermentation. The hopsâ bitterness counteracts the maltâs natural sweetness, creating a nice balance of flavors. Adjusting the amount of hops versus the amount of malt will give you different types of beer. Obviously a lot more work goes into brewing your favorite beer, but that is the basics.

WHAT ROLE DO HOPS PLAY IN BEER

So the next time youâre sipping on a delicious, hop-forward IPA, you can tell your friends you know exactly where those hops came from, and how it went from a plant to a beer! And if you really want to experience Yakima Valley hops at their freshest, makes plans to come to Yakima for the Fresh Hop Ale Festival on the first Saturday in October. All the beers at the event have to be brewed with Yakima Valley hops that went from the bine to the beer within 24 hours. Youâve never tasted beer so fresh!

Categorized in: Featured, Hops and Beer

Are Ready to Celebrate the Season?