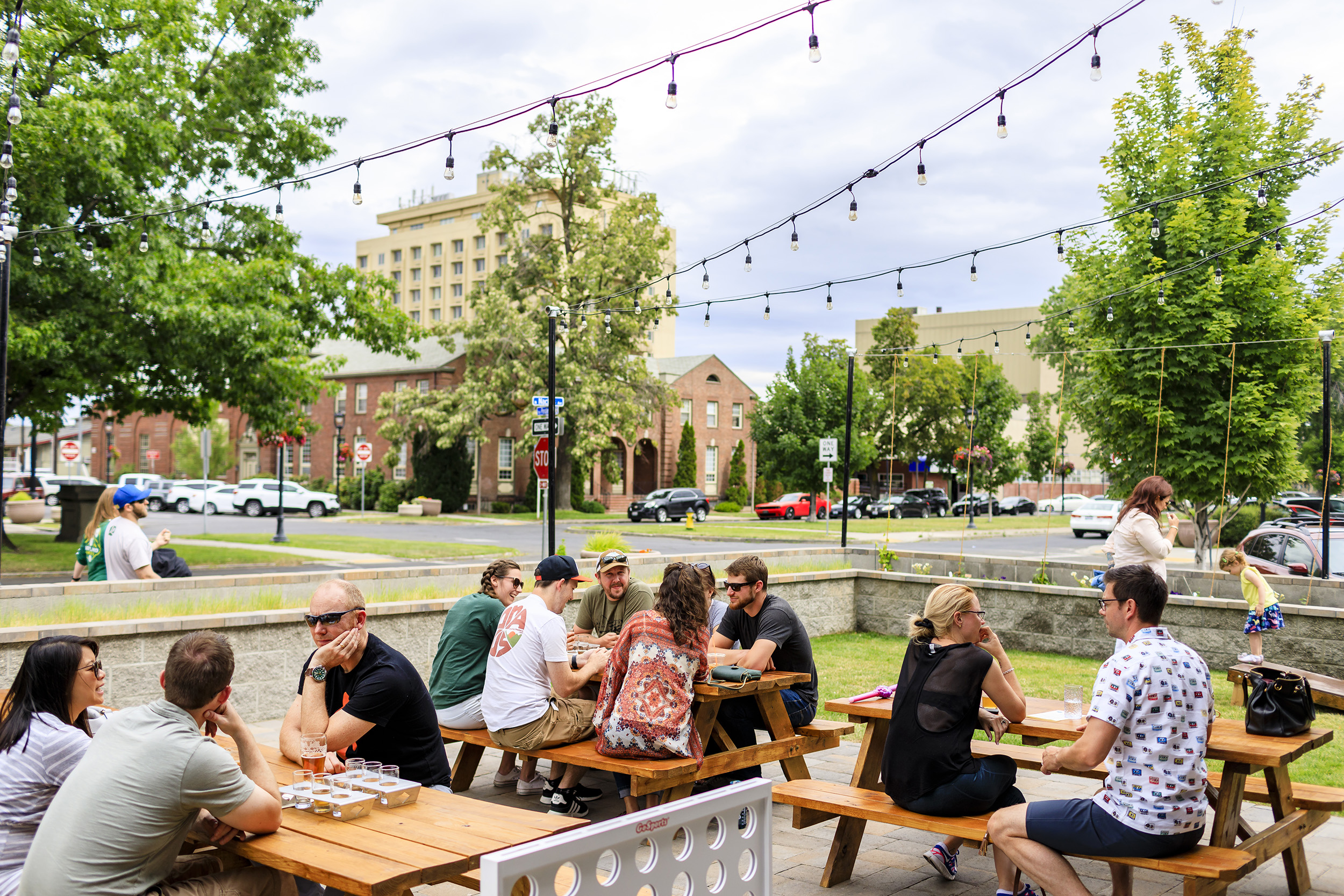 Picturesque Downtown Yakimaâs walkable tree-lined streets deliver entertainment, dining, craft beverages and the arts just steps in any direction. Enjoy art installations and historic buildings on every block, gorgeous hanging baskets spring through fall, period-style streetlamps, street-side dining, evening entertainment and summer concerts. Step out the doors of the historic boutique Hotel Maison, built in 1911, or the newer Hilton Garden Inn next door and find yourself in the center of downtown with restaurants, wineries and breweries close by. If youâre a history lover, youâll enjoy the taking a walk through the past with the charm of historic buildings all around Downtown.

Take a walk east on Yakima Avenue from the hotels and then north on Naches Avenue. Along the way, enjoy the first of many unique utility box art installations, this one depicting an historic Downtown Yakima postcard. Also find âStargazer,â a sculpture donated by Artist Daniel Patton in 2001 and a 111-year-old statue of Colonel J.J. Wiesenberger, commander of Washington State soldiers. Take a look back in time at St. Michaelâs Episcopal Church, built in 1889. One of the oldest buildings in Yakima, it was built with locally mined basalt.Â

On Naches Avenue, one of the first streets planned in 1885, find The Seasons Performance Hall, built in 1918. Admire the Italian Renaissance architecture and plan to attend one of their concerts featuring acclaimed touring performers. The interior domed ceiling creates renowned acoustics and original stained glass windows provide a stunning backdrop. After, stop for a craft beer at Single Hill Brewing, with large glass doors opening to the expansive patio. They feature localsâ favorite food trucks and regularly scheduled live music year-round.

Heading west from the hotels, take a look at the Windows Alive art exhibits installed in street-side windows. Then find the Grand Hotel, built in 1911 and originally advertised as â200 modern roomsâ for $1.00 per night. The George Wilson Building was built in 1902 for $11,000 by Wilson, a Scottish immigrant. As you walk, grab a bite at Essencia Artisan Bakery, housed in a charming 1910 building on North 3rd Street with outside seating, to enjoy handcrafted pastries and other confections. Just outside, find a small bronze bust of JosÃ© MarÃ­a Morelos, namesake of Morelia, Yakima’s Sister City in Mexico. It is a first-ever gift of art from the Mexican government to Washington State in 2011.

On South 3rd Street past the Olive Garden Italian Restaurant youâll come to the Millennium Plaza âWater of Lifeâ art installation by internationally renowned artist, Wen-ti Tsen, featuring items representative of Yakima Valley. Across the street, find the Capitol Theatre, a 1920s Pantages-style vaudeville theatre with murals and ceiling painted by Tony Heinsbergen. Known for presenting Broadway shows and national touring acts, itâs also home to the acclaimed Yakima Symphony Orchestra and Town Hall speaker series. Tours are available by appointment booked in advance. Next door to the Capitol Theatre is the Federal Courthouse, â¯originally a US post office built in 1911, re-named the Justice William O. Douglas Building in honor of the Supreme Court Justice.

On the next block past the plaza, find a hidden gem, a small gift shop called Vintage Me, in a charming, historic building. This quaint, local boutique specializes in a creative blending of vintage and new things, jewelry, gifts and unique repurposed home and garden dÃ©cor. Luluâs Lunchbox, a 50s-inspired setting, is located inside, offering fresh, homemade sandwiches, salads, soups and lattes.

Continuing west on Yakima Avenue fine the Yakima Sports Center, a restaurant and bar housed in the 1900 Columbia Hotel building. The revolving hunter lit up in neon is a Yakima icon. Sit inside or outside and enjoy happy hour specials, live music and events. Next door is the Cowiche Canyon Kitchen & Icehouse Bar , a polished American tavern, also with outside dining. The iconic 1931 Larson Building on the corner of 2nd Street is the tallest building in Yakima. This Art Deco brick office building features floor-to-ceiling marble in the lobby and pressed brass elevator doors. The eastern faÃ§ade is lit with a multicolored light installation every evening. Kana Winery is located in this building with outside seating and live music every Friday and Saturday evening. Another sculpture, Transcendence, is found in front of the Larson Building. The artist, Bernard Hosey, describes it as a âsphere which embraces the entire community.”

Across Yakima Avenue find the art work âAbundanceâ by Michael and Chad Gray, consisting of stone, fused glass and metal. This is a tribute to the natural bounty of water, sun and rich earth that provide the Valley with the foundation for our productive agricultural life. Continuing west is the 1910 S.O. Hawkes & Son building in the Beaux Arts style, as well as several other historic buildings built from 1909 to 1923 before you reach the Lund Building in the historic district of North Front Street. Constructed of local basalt rocks in 1899 and originally a saloon, it now houses Gilbert Cellars Winery and Norms of Yakima, a restaurant and bar featuring casual pub favorites. Both have outside seating and Normâs has large a large roll-up door that lets the outside in.

The historic district is also home to Antolin Cellars in the 1924 Union Pacific Freight Building. Try the fine wines, watch the trains go by and enjoy the outside patio and live weekend music. The 1909 Union Pacific Passenger Building is the third depot built and is currently home to Northtown Coffee House. The sculpture, Convolution, by artist Will Robinson was installed in 2010 in front of the train depot. The sculptor stated. “The circular shapes evoke visual remembrances of railroad steam engines.”  Other historic buildings on front street include; the 1905 Senator Hotel, 1889 Old Fire Station, the Opera House and 1920 Long Branch Building.

Handcrafted Flavors from the Source!