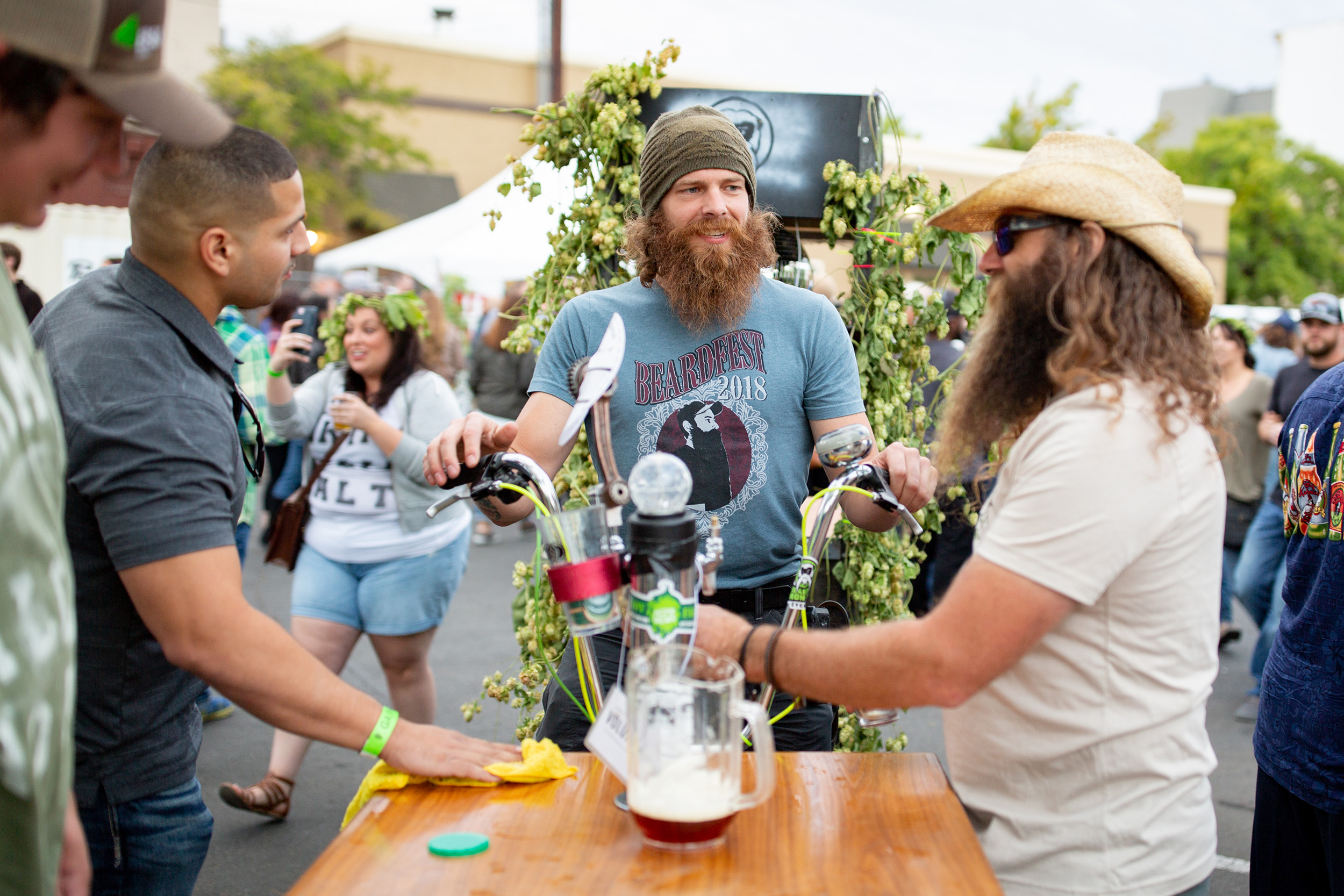 If you’ve noticed all the harvest action in the hop fields, you know what that means – It’s finally time for fresh hops!

Here in the heart of hop country, every single hop cone gets harvested and processed over the span of 30 crazy days in September. It all culminates with the Yakima Valley’s signature Fresh Hop Ale Festival, one of the “Top 10 Beer Festivals in The Nation!” On Saturday, October 5, 65 brewers from around the U.S. descend upon downtown Yakima to compete for top honors with fresh hop ales crafted specifically for the festival using only freshly harvested hops. It’s a one-of-a kind craft beer festival just made for beer lovers! Also enjoy wine, ciders, local flavors from food trucks and vendors, live music and fun activities. Best of all, this is a vehicle for community enrichment and positive social change, with proceeds donated to Yakima Country arts and sciences organizations.

You don’t have to wait for the festival for fresh hop experiences! Enjoy fresh hop ale release parties, live music and hop sensory experiences. Make your own hop crown, tour a hop farm and brewery, and more during the week leading up to the Fresh Hop Ale Festival. Local taprooms will be tapping kegs early so stop by for a taste while you wait for the main event!

Head to Wandering Hop Brewery on October 2 from 3 to 9 pm for Fresh Hop Week Wandering Wendnesday, when they’ll release six fresh hop ales on tap and introduce their latest sandwich! Don’t miss the prize giveaways. They’ll be offering discounts on all merchandise and tasty food will be available.

On October 3 visit the Varietal Beer Co. Fresh Hop Release Party featuring fresh hop collaborations with 10 other breweries. Also on October 3, head to The Sports Center for the release of 1 in 8 Fresh Hop IPA from CLS Farms, Icicle Brewing, and Payette Brewing. From 5 to 8 pm, this is a fundraiser for Wellness House of Yakima And Wenatchee Helping Women Survivors of Cancer.

Get your tickets! Visit the Pop-Up Shop  on Monday, September 30! Hosted by Fresh Hop Ale Festival and Second Street Grill on the patio at Second Street Grill, they will be selling GA tickets and a few of this year’s new merch items! Enter to win 2 sets of (2) VIP tickets by participating in the mini corn hole contest! Tickets also available on Fresh Hop Ale Festival Website and at the door.

Take a tour! Learn about hop growing and harvesting in the Yakima Valley. Tour a hop farm during hop harvest at Hops Direct, LLC. Puterbaugh Farms, a fifth generation hop farming family. Tours of the 1,200+ acre hop farm where 19 different varieties of hops are grown, harvested, stored and shipped are available during hop harvest season, August through September, by reservation. Please contact them at least 24 hours prior to make arrangements. info@hopsdirect.com or 888.972.3616.

Or, Visit the American Hop Museum to learn about the history of the American hop industry; from its early days in the colonies to the Pacific Northwest. Bale Breaker Brewing Co. offers a hop field tour and sensory experience, with a chance to sniff whatever hop is freshly kilned on October 4. Brewery tours are also offered on the October 5 and 6.

Make a hop crown to wear to the festival! Make your own one-of-a-kind fresh hop crown with hops and a variety of decorative elements at Kameo Flower Shop on October 4 from 5:30 pm to 8 pm. There will be a tasty taco bar and drinks to purchase. On October 5, visit Bale Breaker Brewing Co. from 3 to 4pm for Hoppy Hour $4/pints and all the fixings to make your very own fresh hop crown!

Head to Cowiche for a brewery takeover. Before or during the festival, on October 5, from 2 to 9 pm, check out Cowiche Creek Brewing Company’s takeover by Fat Pastor Creations. The Fat Pastor takes over the brewery for a one-of-a kind day of food and brews!

Celebrate with pre and post fresh hop parties! Looking for fun before or after the main event?

The morning after! On Sunday, after the festival,Berchmans Brewing Company and Taproom will serve up free bagels and $10 growler fills from 10 am to 2 pm. Or, get the ultimate hangover cure according toBale Breaker Brewing – Guerra Gourmet’s brunch of breakfast tortas and fresh hop beer from 12 to 3 pm.


Categorized in: Food and Dining, Hops and Beer, Live Music